This course note is still a work in progress! If you have trouble with browser compatibility, please send me a note!

This course note is the first part of the 2016 SIGGRAPH course on Frequency Analysis of Light Transport. Additional material such as slides and source code are available in the main page. Note: most of the diagrams and figure are interactive (but not all of them). Please feel unashamed to click on them!

The idea of Frequency Analysis of Light Transport as sketched by Durand and colleagues [2005] is that many tools used in rendering are better understood using a signal processing approach. Not only can we explain phenomena such as soft shadows and glossy reflections, but we can also improve existing algorithms. For example, Frequency Analysis enables to improve denoising and adaptive sampling algorithms, density estimation or antialiasing.

The Fourier transform of a signal describes its content with respect to variations and not positions. A fourier spectrum restricted to the center of the Fourier domain smooth. As we incorporate more elements far away from the center, the image becomes sharper. Move over areas to remove frequency content above a level.

Mathematically, the Fourier transform of a signal where is:

We need to perform our frequency analysis from first principles governing the rendering of images. In physically based rendering, this is provided by the Rendering Equation [Kajiya 1986] that describe the conservation of radiance energy at surface boundaries:

Here is the directly visible point from in direction . The surface material is represented by the bidirectional reflectance distribution function . The emission from surfaces is noted . And is the clamped dot product to positive values.

However, this expression is not simple to perform frequency analysis due to its recursive nature and to the direction (The usual Fourier transform is defined over a planar domain). We will see in the following how this recursion can be used to build frequency estimate.

The bandwidth of a signal is its Fourier transform’s extent. Mathematically, the bandwidth is the minimum support of the signal’s Fourier transform. It provides information on the necessary sampling pattern to either reconstruct it or to integrate it. Intuitively, it gives the maximum amount of relative variation a signal has. This is enough to predict the maximum distance between samples for perfect sampling. This is however assuming that the bandwidth is finite (or distance between samples would be zero).

For simplicity, we will illustrate the different concepts using 2D light transport.

However, using the Fourier transform defined previously, it would be hard to develop a fine analysis. For example, if we look for the bandwidth of the rendering image of the dragon above, we will find that the bandwidth if infinite due to the hard edges. Instead, we will use a local frequency analysis defined with respect to a central point. 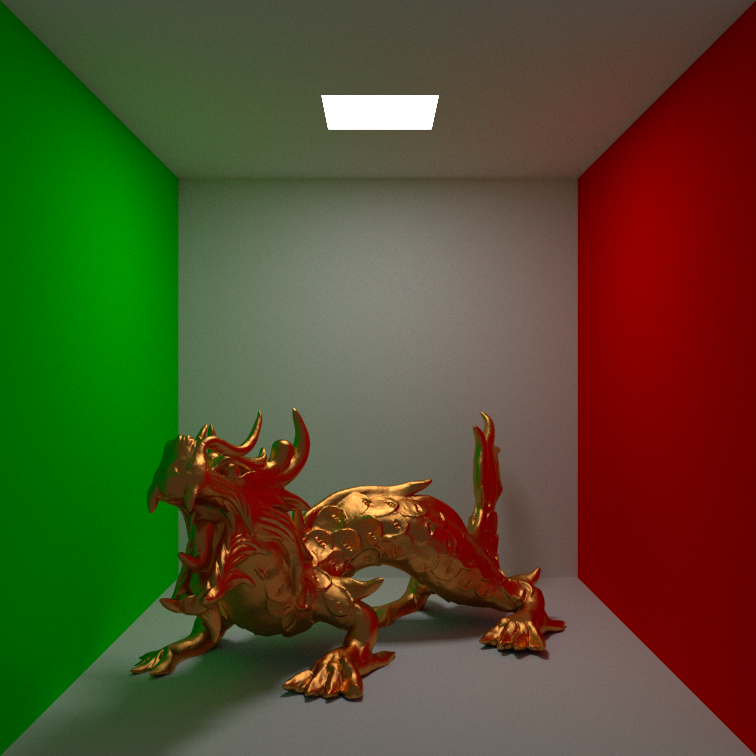 Mathematically, we will incorporate this notion of windowing into the definition of the Fourier transform:

where is a windowing function of size around point .

In the following, to ease notation, we will note the local Fourier transform of the radiance as .

In the following, we will talk about covariance referring to the covariance of the Fourier transform of the radiance function. The covariance is a matrix describing the orientation and spread of a signal. Covariance gives us an indication on the bandwidth of the signal and enable to work with signals having infinite bandwidth.

Since we are interested by 2D light transport, we will use a 2D matrix. The complete formulation of covariance tracing involves a 5D matrix (2D in space, 2D in angles and 1D in time).

where sxx and syy are the variance (or squared standard deviation) of the signal along the x (and respectively y) axis of our domain. sxy = syx is the correlation of the signal with respect to axis x and y. A covariance matrix is symmetric and this property can be used for efficient implementation.

In order to describe the radiance for small perturbation of a given ray, we need a parametrization of this local space. We will use the tangential space defined by the ray. This space can be defined using a two plane parametrization.

The local tangent frame of a 2D ray is described by a two plane parametrization. The first plane describes the relative position and the second plane the relative direction. Click over the \((\delta x, \delta u)\) space to change the ray.

Mathematically, we express positions and directions as perturbations of the main position (resp. direction) along the tangent plane of the ray:

The next step is to express radiance transport equations in this space and to convert them using the Fourier transform.

Expressing the Rendering Equation or the Radiative Transfer Equation in local coordinates is not possible since they rely on global coordinates. Instead, we look at solutions of those equations for simple cases (operators) that correspond to transport evaluated during path tracing. We will need to describe several transport operators such as travel in free space, reflection, refraction, etc..

Remember that we are not interested in the resulting radiance, but to its Fourier transform. What we really want is how an operator affects the Fourier spectrum. Fortunately, under a first order assumption (equivalent to paraxial optics), we can formulate analytically how operators modify it. Furthermore, we will have the same analytical formulation for the covariance matrix.

The travel operator is the simplest of all. It describes the local radiance given that we now the local radiance from a previous position along the ray. Using the tangent plane formulation described earlier, we can update the local position of a ray after a travel of length d. Only the spatial component of the ray will be updated since the ray’s direction remains fixed.

The travel operator. Given a diffuse light source with in the tangent plane of the ray, the local radiance at any point along the ray is the initial local radiance sheared by the distance to the source. Use the mouse to move the plane.

This operator shears the local radiance by the amount of traveled distance. The equivalent operator on the covariance matrix is also a shear which parameter is the traveled distance in meters. However, in the Fourier domain, the shear transfers spatial content to the angular domain. This is the opposite behaviour for radiance. It can be understood in the limit case where the travel distance is infinite. There, locally around the central direction of the ray, only radiance along the same direction remains. Thus the angular content is locally a dirac (a single direction) and the spatial content is locally a constant (same radiance for neighboring positions).

Mathematically, the local radiance after meters is expressed as:

Since we are interested by a first order approximation of the radiance, we can approximate . After this approximation, the Fourier transform of the local radiance can be expressed analytically as:

A Matlab implementation of the operator is the following:

Since we are studying local radiance, we need to account for the fact that part light might be occluded or that part of the light will not interact with an object. We account for those two effects by reducing the local window used for our frequency analysis until there is no more near-hit or near-miss rays. Applying a window to a signal means that we will convolve its Fourier spectrum by the window Fourier spectrum:

This translate into a convolution in the Fourier domain:

The occlusion operator. A square occluder lit by a uniform infinite light source cast a shadow that will result in a wedge shape spectrum. In the primal, we can see the two discontinuity clearly. The wedge is sheared as we move away the senor from the occluder.

We usually assumes that occluders are planar. In such case, we can perform the windowing on the spatial component only. If an occluder has non negligible depth, then we can slice it along its depth and apply multiple times the occlusion operator. In terms of covariance, this boils down to summing the covariance matrices.

The projection operator enables to express the local radiance and the covariance in the tangent plane of objects. This is necessary to express the reflection or refraction of light on a planar surface. When the surface is non-planar, the curvature operator is applied after this operator.

Intuitively, this operator scales the spatial frequency content to match the new frame. Imagine that the incoming radiance is unidirectional and which a structured pattern. If you account for the difference of travel with respect to the tangent plane, some ray will have to travel further than other. Thus the distance with respect to the central position will scale with respect to the angular difference between the incident local plane and the tangent plane and the structured pattern will be dilated. Dilatation of space reduces frequency in the Fourier domain, this is why we have a cosine scaling in the operator.

Mathematically, the projected local radiance on the plane with normal is expressed as:

This translate into the Fourier domain as:

A Matlab implementation of the operator is the following:

The BRDF operator describes how the roughness reduces the bandwidth of the reflected local radiance. This is well known that the BRDF can be thought as being a blurring filter (think of pre-filtered envmaps).

This operator describes the integral product of the incoming local radiance with the BRDF. For an isotropic BRDF model, it is possible to express the outgoing radiance using a convolutive form:

This translate into a product in the Fourier domain:

where B describe the angular blur of the BRDF. It is defined using the inverse of the absolute value of the BRDF’s Hessian in the tangent plane of the reflected ray. For a Phong BRDF with exponent e with a reflected ray in the pure mirror direction, the matrix is defined as:

So far we have expressed how to trace the covariance of local radiance when light is reflected by planar objects. To incorporate the local variation of the object’s surface into covariance tracing, we will enable to project the local radiance from the tangent plane to a first order approximation of the surface using its curvature.

Mathematically, the first order approximation of the projected local radiance on a sphere of curvature is expressed as:

The Fourier transform of the local radiance can be expressed analytically as:

In terms of covariance, the operator is expressed similarly to the travel operator:

In the next section, we will see how to pratically use the knowledge of the Fourer spectrum extents.